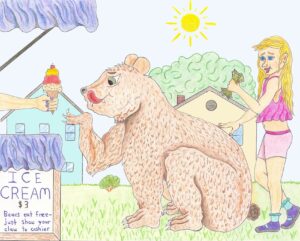 If you go for a hike in the forest, it’s a pretty good idea to watch out for bears. If you walk down the street to the grocery store, you should probably watch out for cars…and bears, too, if you happen to live in certain parts of the country.

You see, in some areas, like in Asheville, North Carolina, black bears are moving into the city. Residents there are having to contend with an influx of new furry neighbors. Hundreds of black bears have set up residence, building their dens within the city limits, in vacant lots, storm ways, and whatever other nooks and crannies they can find to call home.

Bears are now a common site in the city. They lumber about the town, stroll down streets, and rummage through garbage cans looking for delicious things to eat. (Trash is like 5-star dining for bears! A virtual buffet in a can.) They can be seen roaming through backyards, raiding bird feeders for bird feed. (Maybe we should start calling them bear-feeders instead.) “We’d heard there were bears,” says one city resident, “but nobody told us it’d be daily. Nobody told us it’d be out in the front yard.” *1

Here’s the part that I found most interesting: It seems that bears are not only surviving in the city, they’re thriving. Scientists studied the different bear populations, and discovered that city bears actually fare better than their country counterparts. Researchers found that city bears in Asheville have more babies, their babies are stronger and weigh more, and are also more likely to survive to adulthood. Curiously enough, city bears are even less likely than their forest counterparts to be hit by a car or killed by a vehicle. In other words, life in the city is easier for bears.

This got me thinking: What would it be like if other animals decided to move into the city? What would they do? What problems might arise? What if wild giraffes, elephants, hippos, or lions decided to move into town? What if there were a colony of penguins living in your neighborhood? Which creatures might do better in the city, and why? Discuss your thoughts with one another and consider creating stories or artwork around these concepts. I’d love to see what you come up with!

Don’t Miss Out! Join today for instant access to all our treasures!