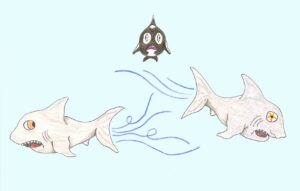 Lots of creatures are scared of sharks. People too, though we have little reason to be…you’re more likely to be killed by a falling coconut than you are by a shark. Which makes one wonder: If you’re a great white shark, the most ferocious of all the sharks, what scares +you+?

You might be inclined to answer “nothing at all,” but that’s not entirely true. Scientists were tracking great white sharks with GPS monitors, watching their activities on a computer screen, when all 17 sharks they were monitoring suddenly up and left their normal hunting grounds within a few hours of one another. What do you suppose would make all these sharks suddenly startle and skedaddle?

The answer turns out to be orcas, otherwise known as killer whales, which is a rather misleading name because they’re not actually a whale but rather a type of dolphin. Orcas are pretty much the apex predator of the sea, and have been known to occasionally prey on sharks. Which is why all the great whites decided to leave their normal territory when orcas came a little too close for comfort.

Don’t Miss Out! Join today for instant access to all our treasures!